The BBC has reported that homes and businesses will have a legal right to demand faster broadband speed by 2020.

This might be good for the likes of those who live at this rural spot - I recently quoted them for a EAD circuit to rescue them from the paltry 0.3 Mbps connection they can get on copper. The Excess Construction Costs were staggeringly high.

Whilst providing the geographically challenged speeds of 10 Mbps sounds great; speed and the need for speed will continue to outpace their requirement. Streaming 4K Ultra High Definition, for example, requires about 25 Mbps speeds and although it is relatively new right now, it will be the norm in the coming years and 10 Mbps will not suffice.

We are seeing this in the EAD circuits we are delivering to customers at 2 Circles. There is already a fierce trend building on bearer circuits, where we no longer sell 10Mb bearers as they are too limiting. The amount of 100Mb bearers is in sharp decline as businesses conclude that within a mere 36 months they might require greater. 1Gb bearers are becoming the norm, where some customers have ordered and installed (subject to the usual postcode lottery) a 1Gb circuit running at the full 1 Gbps speed for less than £500 per month. 2017 has also seen our first internet facing 10Gb bearer order and we have more in quote stage right now.

It’s difficult to see how 10 Mbps speeds in 2020 is going to make any real difference to 0.3 Mbps today for the UK Small Business. Plus ça change, plus c'est la même chose?

"Homes and businesses will have a legal right to demand faster broadband speed by 2020, the government has said, after rejecting a voluntary offer from BT." 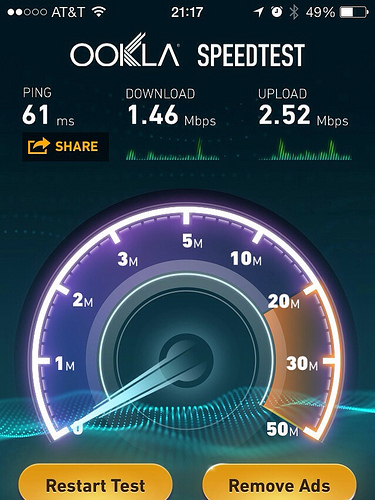 e-SIMs for the Win2nd Year RunningEarly Treats and a few Golfing TricksUnlock your full potential with the 'Open Road'What's all the fuss about 5G?A slow but steady return to normality...Don't let your staff returning to the office be a Trojan horse...The Great British Switch OffOur Royal Connectivity for both domestic and business useProtect your business from just a few £££ per monthHow COVID-19 has sparked a digital age of entrepreneurshipMobile MAY-niaBelated Celebrations and Brand-New AnnouncementsSPRINGING into actionFebruary FunHave you considered your post-lockdown working environment?The problematic pricing of large providersGood riddance and goodbye 2020...Hello 2021Our Festive FarewellLockdown 2 - What does it mean for you and you business?Award WinnersiPhone 12 - Now Available!An alternative to the pubProducts to help your business prevail in the 'new normal'Positive things and positive peopleMorning motivation and fresh facesSafety First!Mobile May MadnessStaying connected as the world changesFull Fibre Breakfast and BroadbandWhy Getting Better Broadband is Essential to Your Business’s SuccessCorporate Social ResponsibilityData Usage Warning!Fibre Connection for the FutureTELECOMS: What You Need to Know in 2019The time for better connectivity is now!2circles Consulting June '192Circles Consulting May '19How can Wi-Fi experience drive loyalty?2Circles Consulting April '19The Decline of the Landline - ten years in telecomsCoulda, Woulda, Shoulda….2Circles Consulting March '19The Next Big Thing?When will I be able to get full fibre broadband?The New Way to Give to Charity?2Circles Consulting February '192Circles Consulting January '192Circles Consulting December '18Protect yourself from telecoms fraud from just £1 a monthIt's that time of year again, is your phone system prepared?Who can remember the Millennium Bug Hype?Limiting 'phone addiction' in the workplace5 things I learned from reading One Device (The Secret History of the iPhone - FT Business book of the year 2017)Land Rover release ruggedised phone for the farming community!New Features in Android PieThe Switch-Off is Happening!Thomson Cooper Secure their £3,000 Broadband Voucher for Gigabit BroadbandNew Version of Android to Help with Your 'lower spec' Android DevicesThe Rural Connectivity Conundrum£3,000 Broadband Vouchers are back!The Right To Demand Faster Broadband SpeedWhen Weather affects Work - The Show MUST go on - But HOW?It's time to 'Flip the Iceberg' on the Cost Of a Hi-Speed and Guaranteed Broadband ServiceCopper is Dead, Join the Full Fibre Revolution!CAT's Latest Phone is a Real WorkhorseTequila & Tacos but Poor Mobile ServiceThe Cost to Your Business of Cheap SolutionsGood ol' BT...Have you locked the front door?Ransomware outbreak - Cisco Meraki will never make you want to cry!Superfast. Ultrafast.HTA News Feb 2017Consumers Spent More Than 900 Billion Hours on Apps in 2016A Golden Template for Every NetworkInternet of Things Will Play Major Role in Ultrafast Broadband GrowthChristmas has arrived early for businesses still on ISDN lines!How will the PSTN and ISDN switch off impact on your business?Reliability Contest: ISDN vs VOIPInternet of Things Devices, Applications & ExamplesBroadband Voucher Scheme Generates Billions of Pounds for British Economy6 ways a VoIP phone system can help your businessHow will your broadband cope with growing business demands?3 Tips to Roam Worry FreeThe Big ISDN Switch-Off17 Mind Blowing “Internet of Things” Facts9dots Review of The YearMobile contracts – the decisions have changed£3,000 Broadband Vouchers - the money is running out!!The Internet of Things - What does it actually mean? And what does it mean for your business?Live in Fife? Want to know when Superfast is coming to you?Video Interpreting For The Deaf Across All Public Services In ScotlandBroadband - speed vs reliabilityDoes anyone remember Blackberry?